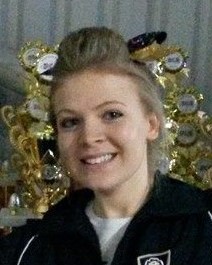 Hannah first started cheerleading in 2009 when she joined the competitive team at The University of York (York Hornets). Having previously been a dancer and gymnast, she quickly fell in love with cheerleading and went on to win regional and national titles with her university team.

After graduating in 2012, Hannah continued cheerleading with Aviator Allstars in Leeds where she competed at level 4 and at level 6. She also took over as coach for the York Hornets from 2012-15, leading the teams to four university national titles in levels 2 and 3.

After moving back to the area in late 2015, Hannah was determined to bring the amazing sport of cheerleading to the children and young people in the community where she grew up. It wasn’t long until Wildfire Cheer was born in February 2016 and Hannah has been coaching and developing the club ever since.

Gemma also first got involved with cheerleading at university, competing with the team at the University of Leicester (Leicester Panthers) from 2012 to 2016, as well as being their Group Stunt Coach from 2016-17.

She started coaching with Wildfire Cheer in 2017 and now coaches several cheer teams, as well as being our head group stunt coach.

Eve also started her cheerleading journey as part of the Leicester Panthers in 2016.

She started coaching with Wildfire Cheer in 2021 and now coaches both cheer and group stunt for the club!

Eve also works full time as a project manager and in her spare time Eve also coaches and competes with Galaxy Allstars in Leicester.

Shannon has danced since the age of 3 and has trained in disco freestyle, hip hop, jazz, lyrical, ballroom and latin. She has previously taught as both a student and qualified teacher under ISTD at Nuneaton Dance center. She began cheerleading at university and and also became hip hop, pom and Jazz/lyrical captain and choreographer. She joined Wildfire as our dance coach in 2019!

Shannon also works full time as a Year 6 teacher in a primary school, and in her spare time Shannon also coaches and competes with Galaxy Allstars in Leicester.

Emma started out as a dancer and gymnast and has been coaching elite level gymnastics for 7 years after getting involved in coaching through her daughters. She also got involved with cheeleading in 2018, through one of her daughters being part of Wildfire Cheer.

Emma is also director and head coach of the gymnastics side of our organisation, Elevate Elite!

Debbie (Hannah’s mum!) has been integral in setting up the club, she has been a part of Wildfire Cheer since we set up in February 2016 and continues to help out with tumbling and our younger competitive teams.

She is a former P.E. teacher and has been coaching gymnastics in Shepshed for over 25 years. She currently coaches gymnastics alongside Emma at Elevate Elite.

Since 2017 we have been running a Junior Coach programme. This gives our athletes aged 12+ the opportunity to help out with younger age classes to gain coaching experience, often leading to them qualifying as Level 1 junior coaches and then Level 2 fully qualified coaches once they are aged 16.

If your child is interested for the future then please get in touch by emailing hannah@wildfirecheer.com.